Words for Wellbeing was a powerful project funded by the Big Lottery Fund ‘Awards for All’ and includes the creation of a writing group exploring womanhood from cradle to grave and every stage in between; as well as a series of pop up events dovetailing into the 2017 Wakefield Lit Fest – Talking Loud and Saying Summat.

Please view the short films below which provide an overview of the project.

Our three main objectives were to

The statistics around mental health are stark – 1 in 4 of us will experience a mental health problem this year and 1 in 6 of us will experience a common mental health condition such as anxiety or depression every week. It also unfortunately appears things are getting worse with mental health conditions are on the rise. The causes are of course incredibly complex, and every person’s experience is different and should be treated as such. However there is much to be hopeful about  – exploring new recovery techniques such as the benefits of the arts on our mental health is a huge growing area of work. Schemes such as ‘Arts on Prescription’ have shown the benefits these schemes can have from reducing levels of anxiety, to increasing confidence and social skills and encouraging re engagement into a wider everyday social world. 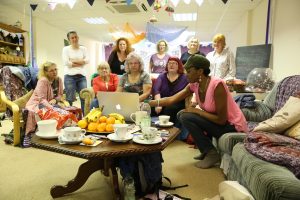 Our project consisted of 10 workshops led by writer Sarah Leah Cobham with women from Wakefield’s Well Woman Centre, 2 open workshops for local writers, 5 pop up events held in Wakefield city centre, two public debates, a final event with performances from our workshop programme and artists with personal experience of mental health and short films documenting the project from filmmaker Amy Charles. The project had many successful outcomes – under Sarah’s facilitation many of the women in her workshop group reported huge increases in confidence both in writing and performing. We distributed over 2,000 information sheets outside Wakefield’s trinity shopping centre to members of the public and instigated hundreds of conversations about mental health. 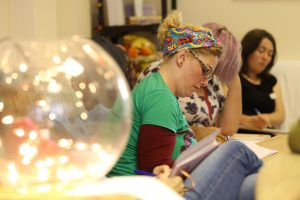 Our final public events were held at St Austin’s Church in Wakefield. We started the day with two public debates about mental health in Wakefield. The first discussion was titled ‘How can we build a more mental health friendly Wakefield?’ and had a panel discussion from Shannon Wishon from the Well Woman Centre and Phil Walters from Creative Minds. The audience and the panellists discussed current gaps in mental health provision in the city such as a men’s only service and more arts provision and gaps in awareness of how to treat people with complex needs from service providers to staff in shops in Wakefield city centre. Our second talk was titled ‘How is mental health portrayed in the arts and media?’ and featured performers from our evening event alongside Ben Dorey, a recovery specialist who works for the NHS from Sheffield. The portrayal of mental health problems was discussed, featuring many examples from soaps, books and theatre, and although there were one or two positive examples of portrayals it was clear there was a huge difference in the portrayal to the reality. Discussions centred around people with mental health problems often being presented as dangerous or aggressive to members of the general public, where as the reality of anxiety and depression conditions meant most people struggled to leave the house.

Our evening event was a culmination of work across the whole project. Sarah Cobham’s workshop group gave a great performance of original work from many women who had never performed in public before. Bill Rider Jones, the ex lead guitarist from The Coral, performed a 40 minute solo set to rapt audience while eloquently articulating his own experiences of his conditions. Performers such as Byron Vincent and Hannah Chutzpah also performed stand up comedy and poetry based on their diagnosis and treatment.

Words for Wellbeing was a huge success, although highlighted how complex a course recovery can be.