As part of Beam’s work as Creative Producer for the Derwent Valley Mills World Heritage Site Great Place Scheme we’re delighted to share details of a digital premiere of a short play created by Artist Heidi Luker sharing the story of an interesting moment in the history of Willersley Castle, Cromford. 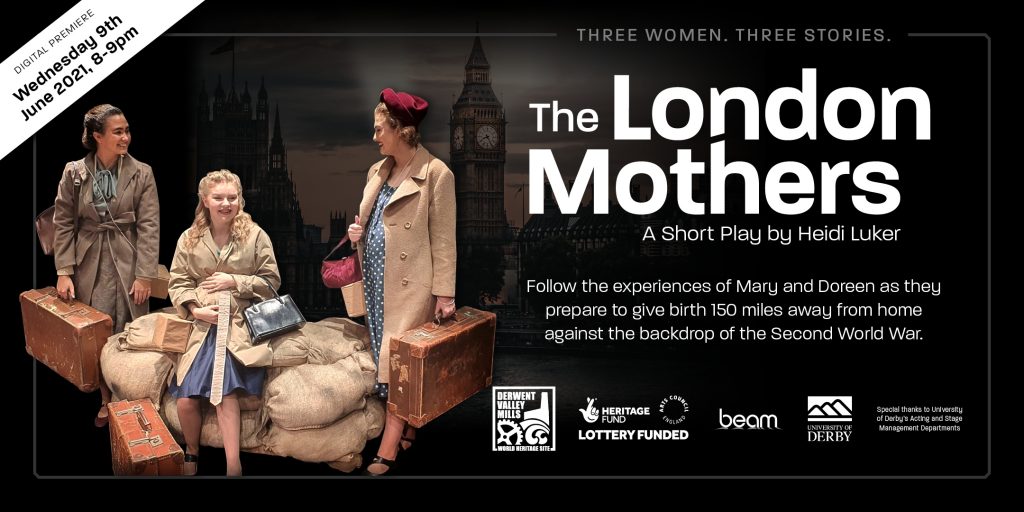 THE LONDON MOTHERS – A Short Play by Heidi Luker

Follow the experiences of Mary and Doreen as they prepare to give birth 150 miles away from home against the backdrop of the Second World War.

‘The London Mothers’ is informed by real life stories of mothers, those born at the castle and former nurses and midwives. We thank them all for their contributions.

Special thanks to University of Derby’s Acting and Stage Management Departments.

This event will feature an online screening of The London Mothers followed by a Q&A with Artist Heidi Luker.

Sign up for your free place to attend the digital premiere via eventbrite.

During the second world war, Willersley Castle, near Cromford, Derbyshire, became a maternity hospital for 4.000 women from North East London, many of whom were unmarried. They were evacuated to Willersley after the Salvation Army’s Mothers Hospital in Clapton was badly damaged during the Blitz. The women stayed with local families in Wirksworth, two miles away until the birth, when they were sent to Willersley. The castle, recently a hotel, but now up for sale, would have held a reunion this year to celebrate the 80th anniversary of the first evacuees arriving in 1940.

Local artist Heidi Luker has been commissioned by the Derwent Valley Mills Heritage Site and Beam, as part of the Great Place Scheme creative programme, to produce this performance to explore this aspect of the heritage of Willersley Castle. The London Mothers has been created following research and conversations carried out by Heidi with mothers, those born at the castle and former nurses and midwives, we thank them for their contributions.

Please note: This event has now taken place and a recording of the live stream can be viewed on youtube.