The memorial designed by Stephen Broadbent now features 61 figures but will eventually feature 106 statues stretching between the village of Duckmanton in Chesterfield and the former pithead.

Each figure is part of a walking trail which symbolises a miner’s journey to the pit and back home again and represents the 106 men who lost their lives in 3 accidents at the site. 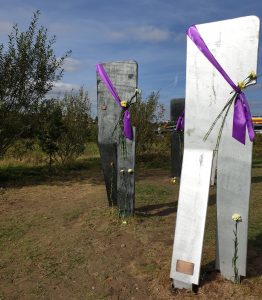 On 21 January 1937 an underground explosion claimed the lives of 9 men and in 1938, 79 miners lost their lives and 40 were seriously injured in a second explosion.

Eighteen miners died and 11 others suffered serious injury in the third disaster at the colliery when the mechanical brake on a lift carrying them to the coalface failed on 30 July 1973.

The former colliery site has now been reclaimed by us and Henry Boot Developments and is home to the Markham Vale regeneration scheme which is working to create 4,100 jobs for local people.

“The Walking Together memorial is a special place where the miner’s community spirit can be remembered and where families, friends and future generations can come together to pay tribute.

“Great friendships were made at the site and often several members of the same family worked there like Frank Smith whose brother James was injured in the 1938 disaster and Bernard Gregory, the cousin of Frank’s wife Elsie, who also lost his life in the explosion.

“The site is now home to 52 businesses and many new jobs have been created but it’s important that we don’t forget the site’s mining history and the incredibly brave men that worked there.” 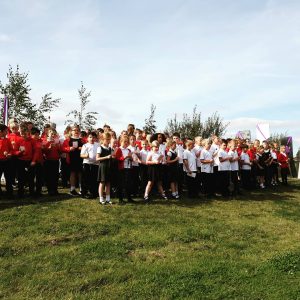 Each figure carries a tag with the name of one of the miners, along with their age and job role.

These most recent additions have been dedicated to: 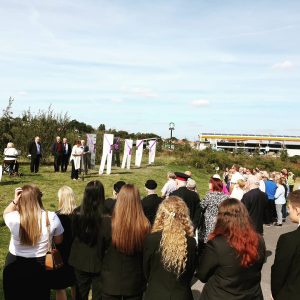 Among the miners’ relatives attending the event to pay tribute was Michael Smith OBE and family – great nephew of Frank Smith and grandson of James ‘Jim’ Smith who was also injured in the disaster.

He was made aware of the Walking Together project by his daughter Natalie who was studying at Sussex University at the time.

“I was aware of the family history – my grandparents used to talk about what happened at the colliery and the extraordinary thing was that my grandfather, who had been with Frank when he died, went back to work down the mine. But I hadn’t thought about it for years until my daughter started researching and said I really needed to look into it.

“It’s a great thing that the council is doing in remembering these men who had tough jobs and paid the ultimate price. So I was more than happy to sponsor a figure for Frank and it’s been an honour to return to Derbyshire to visit the memorial. I’ve lived in 10 different countries but I still feel this is where my roots are.” 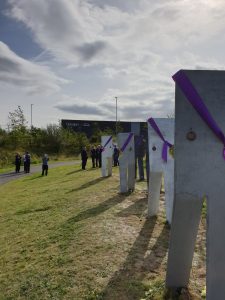 The latest figures have been sponsored by:

Anyone interested in sponsoring a figure can contact Head of Markham Vale, Peter Storey, email: peter.storey@derbyshire.gov.uk or tel: 01629 535417 for more information.